skip to main | skip to sidebar

Did you remember to put the clocks back? Not easy to forget with a kitchen clock this big!!!!!! 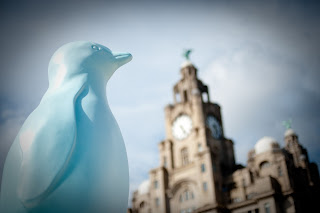 Penguins spotted on banks of the River Mersey 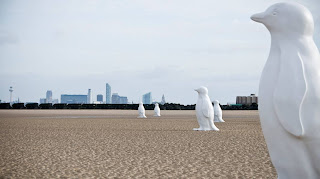 You may like to know that the Penguins are mostly in their secret hideout now and being dressed up in their artistic finery ready for launch date.

The Penguins will be collected from their artists by the 5th Novemeber and we hope to see them appearing at various locations from mid November onwards.

So that means that Claire will be hard at work on the Yew Tree school penguins ready for them to go to their new home on the Edward Pavillion of the Albert Dock.

Did you know that they are just around the corner from the International Museum Of Slavery so why not plan a trip to see the penguins on their plinth and visit the museum at the same time?

Facebook Go Penguins- A Winter's Trail
Posted by Art Arctic at 14:15 No comments:

Birth of some baby penguins in Yew Tree

In September this year the Councillors in Yew Tree ward decided they wanted to support two penguins on The Winter's Trail.
Penguins are appearing in communities all around Liverpool and beyond in readiness for their migration to the City centre for the Festive season.
If you live in, or love, the city you cannot have failed to notice Superlambananas everywhere last year and this year!
The penguins are being brought to life by the same fantastic team, Wild in Art, that brought our beloved Superlambanana trail to the city.
Like the SLB's, some of the penguins will be big and some will be small, some might have corporate logos, some community hands on designs and some artist led but community inspired designs.
Our Yew Tree ward Pingu's are being created by two local schools Mab Lane and Blueberry Park.
The Councillors had the foresight to see that communities become stronger when their residents celebrate their similarities and their differences.
They wanted the Penguins to create opportunities for young children to explore differences across the world and across their own neighbourhood during workshops with the artist.
The Penguin workshops are just one of many local initiatives to improve community cohesion.
The long term goal is that with the help of local community groups in the area, and the authorities in both Liverpool and Knowsley, more and more residents of all ages can celebrate our diverse community.
Both schools are hard at work designing their penguins with the artist Claire Stringer and coming up with ideas of how theirs will look.
Claire will then be heading off to a secret location to create the Yew Tree penguins before they emigrate to the city.
Please keep checking back for Penguin updates and photographs which will appear soon.
Posted by Art Arctic at 11:58 No comments:

Art Arctic
Liverpool, Merseyside, United Kingdom
I'm a converted Superlambanana fanatic, distracted by under dressed Penguins appearing all over Liverpool. Thankfully they are being dressed in artistic outfits by our communities as we speak. When ready they will head for the bright lights of the city centre where they will be in the spotlight for the festive period. See you on The Winter's Trail...